Accelerating loss of seagrasses across the globe threatens coastal ecosystems 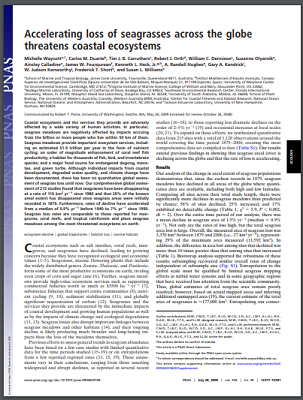 Coastal ecosystems and the services they provide are adversely affected by a wide variety of human activities. In particular, seagrass meadows are negatively affected by impacts accruing from the billion or more people who live within 50 km of them. Seagrass meadows provide important ecosystem services, including an estimated $1.9 trillion per year in the form of nutrient cycling; an order of magnitude enhancement of coral reef fish productivity; a habitat for thousands of fish, bird, and invertebrate species; and a major food source for endangered dugong, manatee, and green turtle. Although individual impacts from coastal development, degraded water quality, and climate change have been documented, there has been no quantitative global assessment of seagrass loss until now. Our comprehensive global assessment of 215 studies found that seagrasses have been disappearing at a rate of 110 km2 yr1 since 1980 and that 29% of the known areal extent has disappeared since seagrass areas were initially recorded in 1879. Furthermore, rates of decline have accelerated from a median of 0.9% yr1 before 1940 to 7% yr1 since 1990. Seagrass loss rates are comparable to those reported for mangroves, coral reefs, and tropical rainforests and place seagrass meadows among the most threatened ecosystems on earth.