Ecological connectivity between the areas beyond national jurisdiction and coastal waters: Safeguarding interests of coastal communities in developing countries 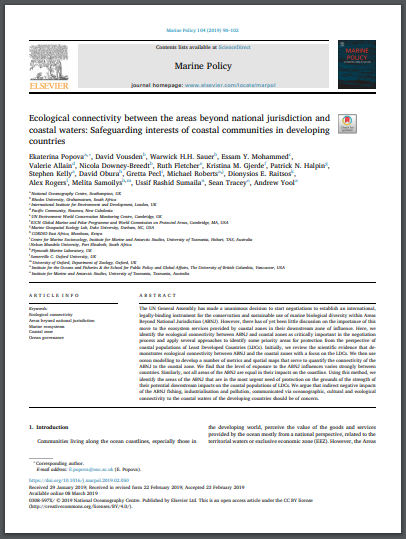 The UN General Assembly has made a unanimous decision to start negotiations to establish an international, legally-binding instrument for the conservation and sustainable use of marine biological diversity within Areas Beyond National Jurisdiction (ABNJ). However, there has of yet been little discussion on the importance of this move to the ecosystem services provided by coastal zones in their downstream zone of influence. Here, we identify the ecological connectivity between ABNJ and coastal zones as critically important in the negotiation process and apply several approaches to identify some priority areas for protection from the perspective of coastal populations of Least Developed Countries (LDCs). Initially, we review the scientific evidence that demonstrates ecological connectivity between ABNJ and the coastal zones with a focus on the LDCs. We then use ocean modelling to develop a number of metrics and spatial maps that serve to quantify the connectivity of the ABNJ to the coastal zone. We find that the level of exposure to the ABNJ influences varies strongly between countries. Similarly, not all areas of the ABNJ are equal in their impacts on the coastline. Using this method, we identify the areas of the ABNJ that are in the most urgent need of protection on the grounds of the strength of their potential downstream impacts on the coastal populations of LDCs. We argue that indirect negative impacts of the ABNJ fishing, industrialisation and pollution, communicated via oceanographic, cultural and ecological connectivity to the coastal waters of the developing countries should be of concern.

Statement by the CBD Executive Secretary on the occasion of WORLD WILDLIFE…
March 5, 2021 by [email protected]
Read More

What's happening to the most remote coral reefs on Earth?
March 5, 2021 by [email protected]
Read More