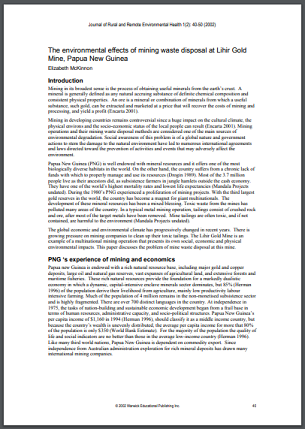 Mining in developing countries remains controversial since a huge impact on the cultural climate, the physical environs and the socio-economic status of the local people can result. Mining operations and their mining waste disposal methods are considered one of the main sources of environmental degradation. Social awareness of this problem is of a global nature and government actions to stem the damage to the natural environment have led to numerous international agreements and laws directed toward the prevention of activities and events that may adversely affect the environment. Papua New Guinea (PNG) is well endowed with mineral resources and it offers one of the most biologically diverse habitats in the world. On the other hand, the country suffers from a chronic lack of funds with which to properly manage and use its resources. Most of the 3.7 million people live as their ancestors did, as subsistence farmers in jungle hamlets outside the cash economy. They have one of the world’s highest mortality rates and lowest life expectancies. During the 1980’s PNG experienced a proliferation of mining projects. With the third largest gold reserves in the world, the country has become a magnet for giant multinationals. The development of these mineral resources has been a mixed blessing.