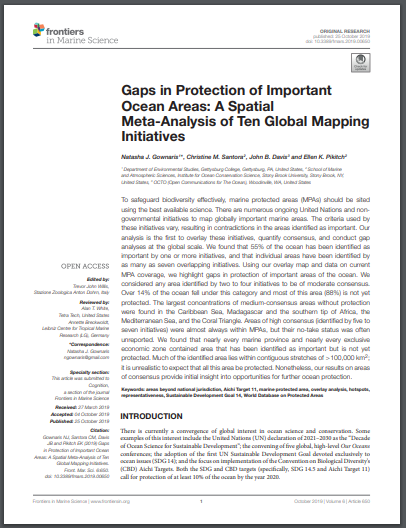 To safeguard biodiversity effectively, marine protected areas (MPAs) should be sited using the best available science. There are numerous ongoing United Nations and nongovernmental initiatives to map globally important marine areas. The criteria used by these initiatives vary, resulting in contradictions in the areas identified as important. Our analysis is the first to overlay these initiatives, quantify consensus, and conduct gap analyses at the global scale. We found that 55% of the ocean has been identified as important by one or more initiatives, and that individual areas have been identified by as many as seven overlapping initiatives. Using our overlay map and data on current MPA coverage, we highlight gaps in protection of important areas of the ocean. We considered any area identified by two to four initiatives to be of moderate consensus. Over 14% of the ocean fell under this category and most of this area (88%) is not yet protected. The largest concentrations of medium-consensus areas without protection were found in the Caribbean Sea, Madagascar and the southern tip of Africa, the Mediterranean Sea, and the Coral Triangle. Areas of high consensus (identified by five to seven initiatives) were almost always within MPAs, but their no-take status was often unreported. We found that nearly every marine province and nearly every exclusive economic zone contained area that has been identified as important but is not yet protected. Much of the identified area lies within contiguous stretches of >100,000 km2 ; it is unrealistic to expect that all this area be protected. Nonetheless, our results on areas of consensus provide initial insight into opportunities for further ocean protection.