Hope and doubt for the world’s marine ecosystems 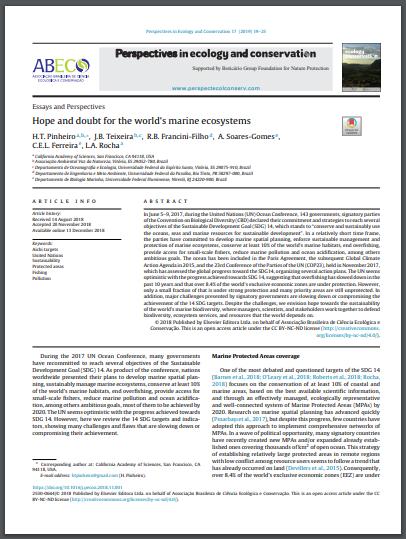 In June 5–9, 2017, during the United Nations (UN) Ocean Conference, 143 governments, signatory parties of the Convention on Biological Diversity (CBD) declared their commitment and strategies to reach several objectives of the Sustainable Development Goal (SDG) 14, which stands to “conserve and sustainably use the oceans, seas and marine resources for sustainable development”. In a relatively short time frame, the parties have committed to develop marine spatial planning, enforce sustainable management and protection of marine ecosystems, conserve at least 10% of the world’s marine habitats, end overfishing, provide access for small-scale fishers, reduce marine pollution and ocean acidification, among others ambitious goals. The ocean has been included in the Paris Agreement, the subsequent Global Climate Action Agenda in 2015, and the 23rd Conference of the Parties of the UN (COP23), held in November 2017, which has assessed the global progress toward the SDG14, organizing several action plans. The UN seems optimistic with he progress achieved towards SDG 14, suggesting that overfishing has slowed down in the past 10 years and that over 8.4% of the world’s exclusive economic zones are under protection. However, only a small fraction of that is under strong protection and many priority areas are still unprotected. In addition, major challenges presented by signatory governments are slowing down or compromising the achievement of the 14 SDG targets. Despite the challenges, we envision hope towards the sustainability of the world’s marine biodiversity, where managers, scientists, and stakeholders work together to defend biodiversity, ecosystem services, and resources that the world depends on.