Preconditions for a Blue Economy 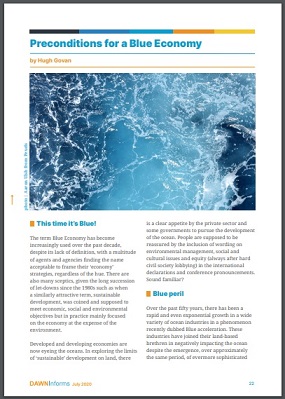 The term Blue Economy has become increasingly used over the past decade, despite its lack of definition, with a multitude of agents and agencies finding the name acceptable to frame their ‘economy’ strategies, regardless of the hue. There are also many sceptics, given the long succession of let-downs since the 1980s such as when a similarly attractive term, sustainable development, was coined and supposed to meet economic, social and environmental objectives but in practice mainly focused on the economy at the expense of the environment.