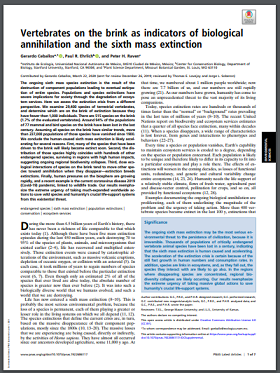 The ongoing sixth mass species extinction is the result of the destruction of component populations leading to eventual extirpation of entire species. Populations and species extinctions have severe implications for society through the degradation of ecosystem services. Here we assess the extinction crisis from a different perspective. We examine 29,400 species of terrestrial vertebrates, and determine which are on the brink of extinction because they have fewer than 1,000 individuals. There are 515 species on the brink (1.7% of the evaluated vertebrates). Around 94% of the populations of 77 mammal and bird species on the brink have been lost in the last century. Assuming all species on the brink have similar trends, more than 237,000 populations of those species have vanished since 1900. We conclude the human-caused sixth mass extinction is likely accelerating for several reasons. First, many of the species that have been driven to the brink will likely become extinct soon. Second, the distribution of those species highly coincides with hundreds of other endangered species, surviving in regions with high human impacts, suggesting ongoing regional biodiversity collapses. Third, close ecological interactions of species on the brink tend to move other species toward annihilation when they disappear—extinction breeds extinctions. Finally, human pressures on the biosphere are growing rapidly, and a recent example is the current coronavirus disease 2019 (Covid-19) pandemic, linked to wildlife trade. Our results reemphasize the extreme urgency of taking much-expanded worldwide actions to save wild species and humanity’s crucial life-support systems from this existential threat.

Can pumping up cold water from deep within the ocean halt coral bleaching?
September 18, 2020 by [email protected]
Read More

The Future of Our Ocean is in Our Hands: An Update on the Palau National…
September 11, 2020 by [email protected]org
Read More