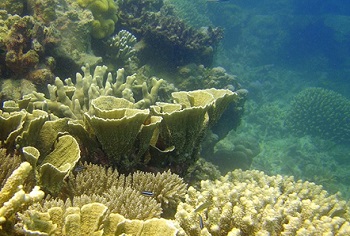 For the first time, researchers have studied the impact of ocean acidification on coral reefs with a device that allows them to increase levels of carbon dioxide on living coral for months at a time. Corals exposed to higher levels of carbon dioxide sustained more damage than those in aquarium experiments because fish, sponges, and other native organisms grazed on the fragile reefs. However, living corals were more resilient than scientists expected, providing a promising buffer against the impacts of climate change.