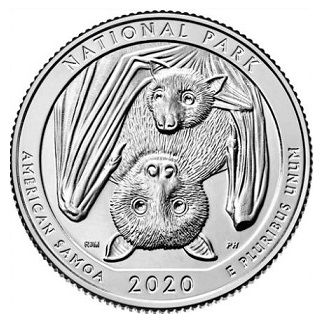 The United States Mint has released the final designs for the America the Beautiful Quarters program, and one of the designs depicts a Samoan fruit bat hanging in a tree with her pup...It is being released to honor the National Park of American Samoa. The design of the quarter is being used to raise awareness to the threatened status of Samoan fruit bats due to habitat loss and commercial hunting, according to the US Mint. Samoan fruit bats are native to the National Park of American Samoa. Located 2,600 miles southwest of Hawaii, it is one of the most remote parks in the US National Park System, the US Mint says.