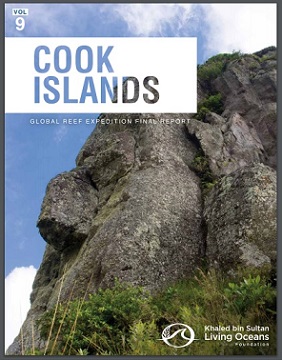 In April 2011, the Khaled bin Sultan Living Oceans Foundation (KSLOF) embarked on the Global Reef Expedition (GRE)- the largest coral reef survey and mapping expedition in history. The GRE was a rigorous five-year scientific mission to study coral reefs around the world. The expedition was designed to assess the impact of anthropogenic and natural disturbances on reef ecosystems, including runoff, climate change, storm damage, and Crown-of-Thorns Starfish (COTS) outbreaks. The ultimate goal of the Foundation’s research is to provide scientists, managers, and stakeholders with recommendations that support the formulation of an effective management strategy for coral reefs and associated habitats. Herein, we report on a study that KSLOF has undertaken to assess the health and resilience of the coral reefs in the Cook Islands. The study took place in April-May 2013 and July 2015. The Foundation quantitatively measured, categorized, and mapped coral reef environments at three islands in the Cook Islands: Rarotonga, Aitutaki (by default the nearby island of Manuae which shares the lagoon with Aitutaki), and Palmerston Atoll.