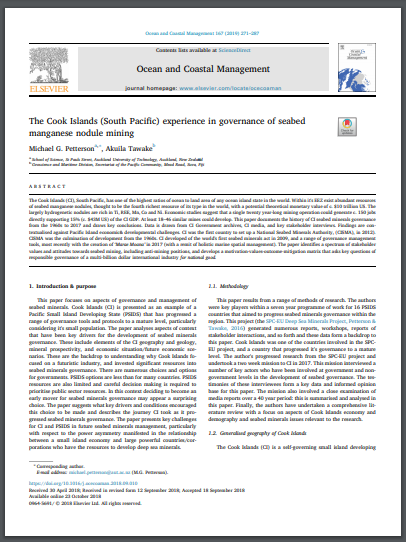 The Cook Islands (CI), South Pacific, has one of the highest ratios of ocean to land area of any ocean island state in the world. Within it's EEZ exist abundant resources of seabed manganese nodules, thought to be the fourth richest resource of its type in the world, with a potential theoretical monetary value of c. $10 trillion US. The largely hydrogenetic nodules are rich in Ti, REE, Mn, Co and Ni. Economic studies suggest that a single twenty year-long mining operation could generate c. 150 jobs directly supporting 15% (c. $43M US) of the CI GDP. At least 18–46 similar mines could develop. This paper documents the history of CI seabed minerals governance from the 1960s to 2017 and draws key conclusions. Data is drawn from CI Government archives, CI media, and key stakeholder interviews. Findings are contextualised against Pacific Island economic& developmental challenges. CI was the first country to set up a National Seabed Minerals Authority, (CISMA), in 2012). CISMA was the culmination of development from the 1960s. CI developed of the world's first seabed minerals act in 2009, and a range of governance management tools, most recently with the creation of ‘Marae Moana’ in 2017 (with a remit of holistic marine spatial management). The paper identifies a spectrum of stakeholder values and attitudes towards seabed mining, including anti-mining positions, and develops a motivation-values-outcome-mitigation matrix that asks key questions of responsible governance of a multi-billion dollar international industry for national good.

Can pumping up cold water from deep within the ocean halt coral bleaching?
September 18, 2020 by [email protected]
Read More

The Future of Our Ocean is in Our Hands: An Update on the Palau National…
September 11, 2020 by [email protected]
Read More