Agreeing to disagree on what we have or have not agreed on: The current state of play of the BBNJ negotiations on the status of marine genetic resources in areas beyond national jurisdiction 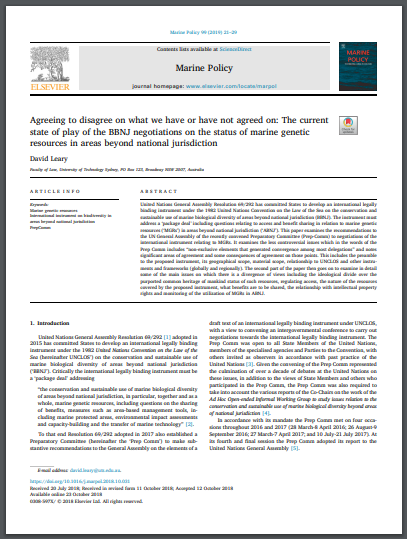 United Nations General Assembly Resolution 69/292 has committed States to develop an international legally binding instrument under the 1982 United Nations Convention on the Law of the Sea on the conservation and sustainable use of marine biological diversity of areas beyond national jurisdiction (BBNJ). The instrument must address a ‘package deal’ including questions relating to access and benefit sharing in relation to marine genetic resources (‘MGRs’) in areas beyond national jurisdiction (‘ABNJ’). This paper examines the recommendations to the UN General Assembly of the recently convened Preparatory Committee (Prep-Comm) to negotiations of the international instrument relating to MGRs. It examines the less controversial issues which in the words of the Prep Comm includes “non-exclusive elements that generated convergence among most delegations” and notes significant areas of agreement and some consequences of agreement on those points. This includes the preamble to the proposed instrument, its geographical scope, material scope, relationship to UNCLOS and other instruments and frameworks (globally and regionally). The second part of the paper then goes on to examine in detail some of the main issues on which there is a divergence of views including the ideological divide over the purported common heritage of mankind status of such resources, regulating access, the nature of the resources covered by the proposed instrument, what benefits are to be shared, the relationship with intellectual property rights and monitoring of the utilization of MGRs in ABNJ.

Towards the Quantification of Illegal, Unreported and Unregulated (IUU)…
August 8, 2020 by [email protected]
Read More