Atolls of the Tropical Pacific Ocean: Wetlands Under Threat 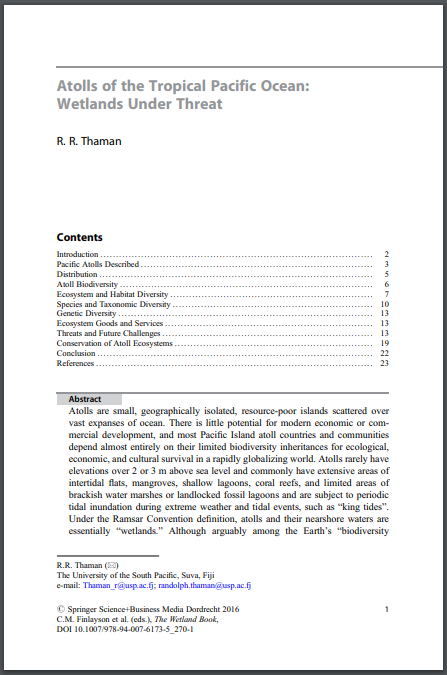 Atolls are small, geographically isolated, resource-poor islands scattered over vast expanses of ocean. There is little potential for modern economic or commercial development, and most Pacific Island atoll countries and communities depend almost entirely on their limited biodiversity inheritances for ecological, economic, and cultural survival in a rapidly globalizing world. Atolls rarely have elevations over 2 or 3 m above sea level and commonly have extensive areas of intertidal flats, mangroves, shallow lagoons, coral reefs, and limited areas of brackish water marshes or landlocked fossil lagoons and are subject to periodic tidal inundation during extreme weather and tidal events, such as “king tides”. Under the Ramsar Convention definition, atolls and their nearshore waters are essentially “wetlands.” Although arguably among the Earth’s “biodiversity coolspots” with the poorest and highly threatened terrestrial biodiversity inheritances on Earth, they are among the last remaining sanctuaries for extensive, but highly threatened populations of breeding seabirds and coral reef-associated biodiversity. Fortunately, under Ramsar, UNESCO World Heritage, and other relevant conventions and initiatives, the conservation, restoration and sustainable use of atoll biodiversity and associated ethnobiodiversity (the uses, knowledge, beliefs, management systems, taxonomies and language that traditional and the scientific communities have for biodiversity) is now clearly on the conservation agenda.

The Future of Our Ocean is in Our Hands: An Update on the Palau National…
September 11, 2020 by [email protected]
Read More