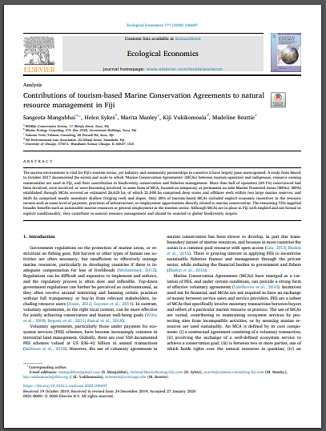 The marine environment is vital for Fiji's tourism sector, yet industry and community partnerships to conserve it have largely gone unrecognised. A study from March to October 2017 documented the extent and scale to which ‘Marine Conservation Agreements’ (MCAs) between tourism operators and indigenous, resource owning communities are used in Fiji, and their contribution to biodiversity conservation and fisheries management. More than half of operators (69.1%) interviewed had been involved, were involved, or were becoming involved, in some form of MCA, focused on temporary or permanent no-take Marine Protected Areas (MPAs). MPAs established through MCAs covered an estimated 26,625 ha, of which 21,000 ha comprised deep water and offshore reefs within two large marine reserves, and 5625 ha comprised mostly nearshore shallow fringing reefs and slopes. Only 28% of tourism-based MCAs included explicit economic incentives to the resource owners such as some level of payment, provision of infrastructure, or employment opportunities directly related to marine conservation. The remaining 72% supplied broader benefits such as sustainable marine resources or general employment in the tourism sector. Although MCAs are in place in Fiji with implied and not formal or explicit conditionality, they contribute to natural resource management and should be counted in global biodiversity targets.