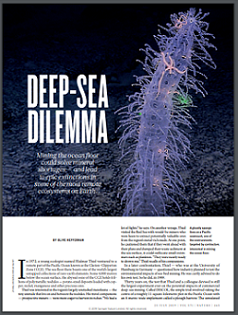 The deep sea — usually defined as the realm below 200 metres — is a world of extremes. Temperatures near the sea bed in many places hover near 0 °C, there is next to no light, and pressures can exceed 1,000 bars, equivalent to having a couple of elephants standing on your big toe. But still life thrives. The deep sea contains a vast array of ecosystems that researchers have barely begun to study. The ocean floor holds vast deposits of ores containing sought-after metals. Companies are exploring the potential to mine three types of deposits in the deep sea: ferromanganese nodules, metal-rich crusts on seamounts and sulfide deposits near hydrothermal vents along the mid-ocean ridges. Most commercial attention is focused on the nodules in the Pacific Ocean’s Clarion-Clipperton zone (CCZ). Estimates suggest that the CCZ holds more of certain metals than do land deposits. For years, it was assumed that the first deep-sea environment to be mined would be hydrothermal vents in Papua New Guinea’s territorial waters. Nautilus Minerals in Toronto, Canada, was pursuing that project, but financial difficulties and local opposition derailed the venture, leaving the CCZ as the most likely test bed for deep-sea mining. Estimates suggest that the nodules in that region contain more cobalt, manganese and nickel than the total of all known deposits on land (see ‘Sunken treasure’). The CCZ stretches from Hawaii to the Baja California Peninsula, and is as wide as the contiguous United States.