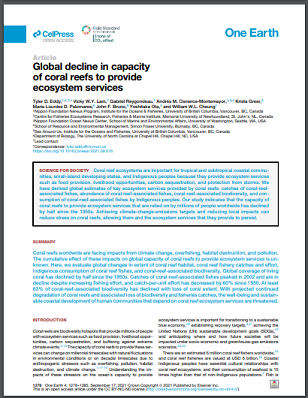 Coral reefs worldwide are facing impacts from climate change, overfishing, habitat destruction, and pollution. The cumulative effect of these impacts on global capacity of coral reefs to provide ecosystem services is unknown. Here, we evaluate global changes in extent of coral reef habitat, coral reef fishery catches and effort, Indigenous consumption of coral reef fishes, and coral-reef-associated biodiversity. Global coverage of living coral has declined by half since the 1950s. Catches of coral-reef-associated fishes peaked in 2002 and are in decline despite increasing fishing effort, and catch-per-unit effort has decreased by 60% since 1950. At least 63% of coral-reef-associated biodiversity has declined with loss of coral extent. With projected continued degradation of coral reefs and associated loss of biodiversity and fisheries catches, the well-being and sustainable coastal development of human communities that depend on coral reef ecosystem services are threatened.

Scientists’ warning – The outstanding biodiversity of islands is in peril
October 25, 2021 by sprep-pa
Read More

Envisioning a resilient future for biodiversity conservation in the wake…
October 8, 2021 by sprep-pa
Read More