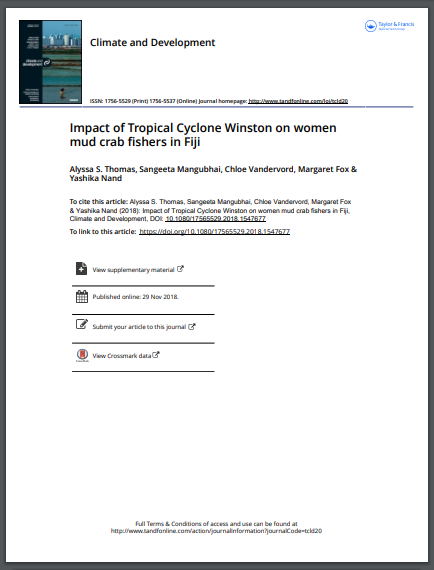 Communities dependent on natural resources for food and livelihoods are extremely vulnerable to climate change and its impacts. Tropical cyclones are a frequent occurrence in the Pacific and can have devastating impacts on coastal communities, particularly in remote or isolated areas. However, most post-cyclone studies focus on damages and losses to infrastructure and services, and do not quantify the impact on fishers or community fisheries. We conducted a study to assess the social and economic effects of Category 5 Tropical Cyclone Winston on mud crab fishers in Bua Province, Fiji. The study methodology was one-on-one surveys with mud crab fishers, mostly women, in 16 villages who had previously participated in a 2015 value chain analysis survey. Post-cyclone, 52% of the fishers had stopped harvesting crabs because many were focussed on repairing their homes and had difficulties accessing collection sites and markets. Fishers that continued reported less frequent collection, and fewer and smaller crabs. To obtain income for house repairs, 65% of the fishers still harvesting sold the crabs to local traders, rather than consuming them. Understanding mud crab fishers’ vulnerability to natural disasters, the barriers to adaptation and how their livelihoods are affected is key to effective mitigation and adaptation.