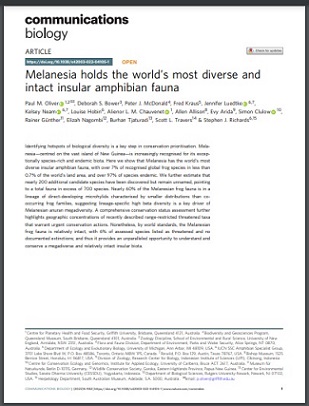 Identifying hotspots of biological diversity is a key step in conservation prioritisation. Melanesia—centred on the vast island of New Guinea—is increasingly recognised for its exceptionally species-rich and endemic biota. Here we show that Melanesia has the world’s most diverse insular amphibian fauna, with over 7% of recognised global frog species in less than 0.7% of the world’s land area, and over 97% of species endemic. We further estimate that nearly 200 additional candidate species have been discovered but remain unnamed, pointing to a total fauna in excess of 700 species. Nearly 60% of the Melanesian frog fauna is in a lineage of direct-developing microhylids characterised by smaller distributions than co-occurring frog families, suggesting lineage-specific high beta diversity is a key driver of Melanesian anuran megadiversity. A comprehensive conservation status assessment further highlights geographic concentrations of recently described range-restricted threatened taxa that warrant urgent conservation actions. Nonetheless, by world standards, the Melanesian frog fauna is relatively intact, with 6% of assessed species listed as threatened and no documented extinctions; and thus it provides an unparalleled opportunity to understand and conserve a megadiverse and relatively intact insular biota.