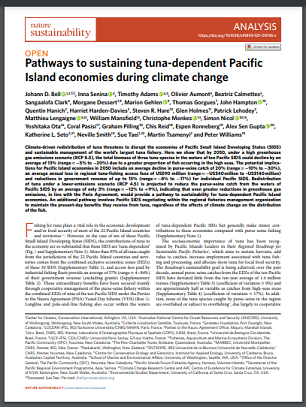 Climate-driven redistribution of tuna threatens to disrupt the economies of Pacific Small Island Developing States (SIDS) and sustainable management of the world’s largest tuna fishery. Here we show that by 2050, under a high greenhouse gas emissions scenario (RCP 8.5), the total biomass of three tuna species in the waters of ten Pacific SIDS could decline by an average of 13% (range =−5% to −20%) due to a greater proportion of fish occurring in the high seas. The potential implications for Pacific Island economies in 2050 include an average decline in purse-seine catch of 20% (range =−10% to −30%), an average annual loss in regional tuna-fishing access fees of US$90 million (range =−US$40 million to –US$140 million) and reductions in government revenue of up to 13% (range =−8% to −17%) for individual Pacific SIDS. Redistribution of tuna under a lower-emissions scenario (RCP 4.5) is projected to reduce the purse-seine catch from the waters of Pacific SIDS by an average of only 3% (range =−12% to +9%), indicating that even greater reductions in greenhouse gas emissions, in line with the Paris Agreement, would provide a pathway to sustainability for tuna-dependent Pacific Island economies. An additional pathway involves Pacific SIDS negotiating within the regional fisheries management organization to maintain the present-day benefits they receive from tuna, regardless of the effects of climate change on the distribution of the fish.

Landsat at 50: How satellites revolutionized the way we see, and protect,…
September 26, 2022 by sprep-pa
Read More