The role and value of science in shark conservation advocacy 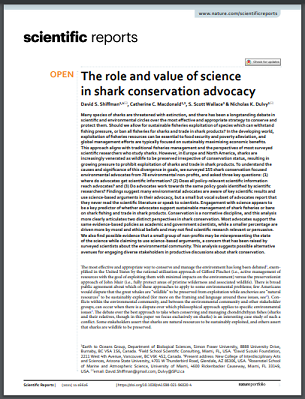 Many species of sharks are threatened with extinction, and there has been a longstanding debate in scientifc and environmental circles over the most efective and appropriate strategy to conserve and protect them. Should we allow for sustainable fsheries exploitation of species which can withstand fshing pressure, or ban all fsheries for sharks and trade in shark products? In the developing world, exploitation of fsheries resources can be essential to food security and poverty alleviation, and global management eforts are typically focused on sustainably maximizing economic benefts. This approach aligns with traditional fsheries management and the perspectives of most surveyed scientifc researchers who study sharks. However, in Europe and North America, sharks are increasingly venerated as wildlife to be preserved irrespective of conservation status, resulting in growing pressure to prohibit exploitation of sharks and trade in shark products. To understand the causes and signifcance of this divergence in goals, we surveyed 155 shark conservation focused environmental advocates from 78 environmental non-profts, and asked three key questions: (1) where do advocates get scientifc information? (2) Does all policy-relevant scientifc information reach advocates? and (3) Do advocates work towards the same policy goals identifed by scientifc researchers? Findings suggest many environmental advocates are aware of key scientifc results and use science-based arguments in their advocacy, but a small but vocal subset of advocates report that they never read the scientifc literature or speak to scientists. Engagement with science appears to be a key predictor of whether advocates support sustainable management of shark fsheries or bans on shark fshing and trade in shark products. Conservation is a normative discipline, and this analysis more clearly articulates two distinct perspectives in shark conservation. Most advocates support the same evidence-based policies as academic and government scientists, while a smaller percentage are driven more by moral and ethical beliefs and may not fnd scientifc research relevant or persuasive. We also fnd possible evidence that a small group of non-profts may be misrepresenting the state of the science while claiming to use science-based arguments, a concern that has been raised by surveyed scientists about the environmental community. This analysis suggests possible alternative avenues for engaging diverse stakeholders in productive discussions about shark conservation.