Scientists’ warning – The outstanding biodiversity of islands is in peril 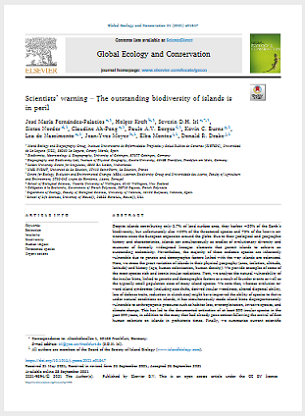 Despite islands contributing only 6.7% of land surface area, they harbor ~20% of the Earth’s biodiversity, but unfortunately also ~50% of the threatened species and 75% of the known extinctions since the European expansion around the globe. Due to their geological and geographic history and characteristics, islands act simultaneously as cradles of evolutionary diversity and museums of formerly widespread lineages—elements that permit islands to achieve an outstanding endemicity. Nevertheless, the majority of these endemic species are inherently vulnerable due to genetic and demographic factors linked with the way islands are colonized. Here, we stress the great variation of islands in their physical geography (area, isolation, altitude, latitude) and history (age, human colonization, human density). We provide examples of some of the most species rich and iconic insular radiations. Next, we analyze the natural vulnerability of the insular biota, linked to genetic and demographic factors as a result of founder events as well as the typically small population sizes of many island species. We note that, whereas evolution toward island syndromes (including size shifts, derived insular woodiness, altered dispersal ability, loss of defense traits, reduction in clutch size) might have improved the ability of species to thrive under natural conditions on islands, it has simultaneously made island biota disproportionately vulnerable to anthropogenic pressures such as habitat loss, overexploitation, invasive species, and climate change. This has led to the documented extinction of at least 800 insular species in the past 500 years, in addition to the many that had already gone extinct following the arrival of first human colonists on islands in prehistoric times. Finally, we summarize current scientific knowledge on the ongoing biodiversity loss on islands worldwide and express our serious concern that the current trajectory will continue to decimate the unique and irreplaceable natural heritage of the world’s islands. We conclude that drastic actions are urgently needed to bend the curve of the alarming rates of island biodiversity loss.