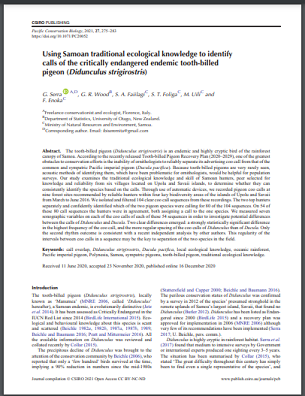 The tooth-billed pigeon (Didunculus strigirostris) is an endemic and highly cryptic bird of the rainforest canopy of Samoa. According to the recently released Tooth-billed Pigeon Recovery Plan (2020–2029), one of the greatest obstacles to conservation efforts is the inability of ornithologists to reliably separate its advertising coo call from that of the common and sympatric Pacific imperial pigeon (Ducula pacifica). Because tooth-billed pigeons are very rarely seen, acoustic methods of identifying them, which have been problematic for ornithologists, would be helpful for population surveys. Our study examines the traditional ecological knowledge and skill of Samoan hunters, peer selected for knowledge and reliability from six villages located on Upolu and Savaii islands, to determine whether they can consistently identify the species based on the calls. Through use of automatic devices, we recorded pigeon coo calls at nine forest sites recommended by reliable hunters within four key biodiversity areas of the islands of Upolu and Savaii from March to June 2016. We isolated and filtered 104 clear coo call sequences from these recordings. The two top hunters separately and confidently identified which of the two pigeon species were calling for 80 of the 104 sequences. On 54 of these 80 call sequences the hunters were in agreement, both assigning a call to the one species. We measured seven sonographic variables on each of the coo calls of each of these 54 sequences in order to investigate potential differences between the calls of Didunculus and Ducula. Two clear differences emerged: a strongly statistically significant difference in the highest frequency of the coo call, and the more regular spacing of the coo calls of Didunculus than of Ducula. Only the second rhythm outcome is consistent with a recent independent analysis by other authors. This regularity of the intervals between coo calls in a sequence may be the key to separation of the two species in the field.

Scientists’ warning – The outstanding biodiversity of islands is in peril
October 25, 2021 by sprep-pa
Read More

Envisioning a resilient future for biodiversity conservation in the wake…
October 8, 2021 by sprep-pa
Read More