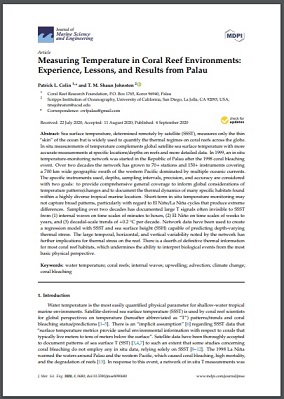 Sea surface temperature, determined remotely by satellite (SSST), measures only the thin “skin” of the ocean but is widely used to quantify the thermal regimes on coral reefs across the globe. In situ measurements of temperature complements global satellite sea surface temperature with more accurate measurements at specific locations/depths on reefs and more detailed data. In 1999, an in situ temperature-monitoring network was started in the Republic of Palau after the 1998 coral bleaching event. Over two decades the network has grown to 70+ stations and 150+ instruments covering a 700 km wide geographic swath of the western Pacific dominated by multiple oceanic currents. The specific instruments used, depths, sampling intervals, precision, and accuracy are considered with two goals: to provide comprehensive general coverage to inform global considerations of temperature patterns/changes and to document the thermal dynamics of many specific habitats found within a highly diverse tropical marine location. Short-term in situ temperature monitoring may not capture broad patterns, particularly with regard to El Niño/La Niña cycles that produce extreme differences. Sampling over two decades has documented large T signals often invisible to SSST from (1) internal waves on time scales of minutes to hours, (2) El Niño on time scales of weeks to years, and (3) decadal-scale trends of +0.2 ◦C per decade. Network data have been used to create a regression model with SSST and sea surface height (SSH) capable of predicting depth-varying thermal stress. The large temporal, horizontal, and vertical variability noted by the network has further implications for thermal stress on the reef. There is a dearth of definitive thermal information for most coral reef habitats, which undermines the ability to interpret biological events from the most basic physical perspective.