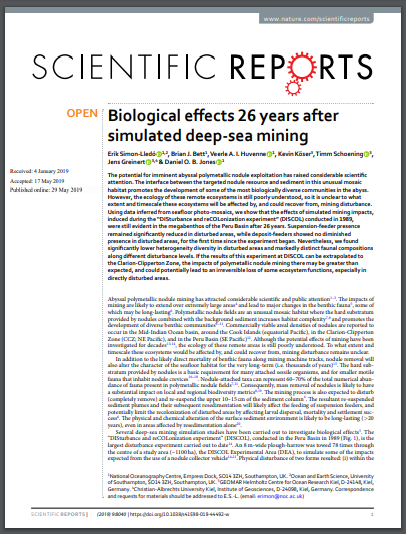 The potential for imminent abyssal polymetallic nodule exploitation has raised considerable scientifc attention. The interface between the targeted nodule resource and sediment in this unusual mosaic habitat promotes the development of some of the most biologically diverse communities in the abyss. However, the ecology of these remote ecosystems is still poorly understood, so it is unclear to what extent and timescale these ecosystems will be afected by, and could recover from, mining disturbance. Using data inferred from seafoor photo-mosaics, we show that the efects of simulated mining impacts, induced during the “DISturbance and reCOLonization experiment” (DISCOL) conducted in 1989, were still evident in the megabenthos of the Peru Basin after 26 years. Suspension-feeder presence remained signifcantly reduced in disturbed areas, while deposit-feeders showed no diminished presence in disturbed areas, for the frst time since the experiment began. Nevertheless, we found signifcantly lower heterogeneity diversity in disturbed areas and markedly distinct faunal compositions along diferent disturbance levels. If the results of this experiment at DISCOL can be extrapolated to the Clarion-Clipperton Zone, the impacts of polymetallic nodule mining there may be greater than expected, and could potentially lead to an irreversible loss of some ecosystem functions, especially in directly disturbed areas.