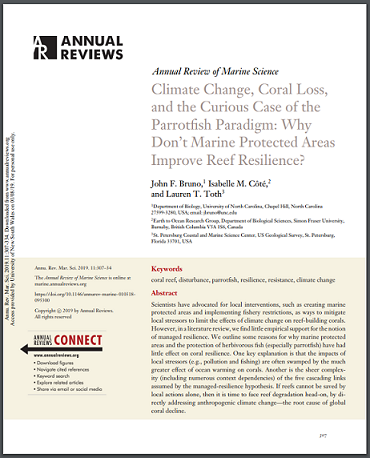 Scientists have advocated for local interventions, such as creating marine protected areas and implementing fishery restrictions, as ways to mitigate local stressors to limit the effects of climate change on reef-building corals. However, in a literature review, we find little empirical support for the notion of managed resilience. We outline some reasons for why marine protected areas and the protection of herbivorous fish (especially parrotfish) have had little effect on coral resilience. One key explanation is that the impacts of local stressors (e.g., pollution and fishing) are often swamped by the much greater effect of ocean warming on corals. Another is the sheer complexity (including numerous context dependencies) of the five cascading links assumed by the managed-resilience hypothesis. If reefs cannot be saved by local actions alone, then it is time to face reef degradation head-on, by directly addressing anthropogenic climate change—the root cause of global coral decline.

Budget 2021: Investing in our Aboriginal Rangers
May 7, 2021 by [email protected]
Read More

Lessons from the rush to reforest
May 7, 2021 by [email protected]
Read More
END_OF_DOCUMENT_TOKEN_TO_BE_REPLACED