Crown of Thorns: Lime Juice and Vinegar Injections as a Cheap and Natural Alternative to Control COTS Outbreaks 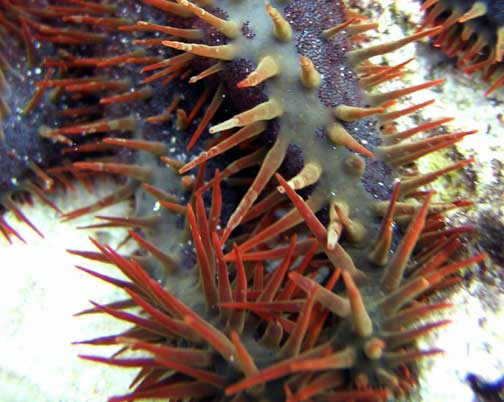 Outbreaks of the corallivorous crown-of-thorns seastar Acanthaster planci (COTS) represent one of the greatest disturbances to coral reef ecosystems in the Indo-Pacific, affecting not only coral reefs but also the coastal communities which rely on their resources. While injection approaches are increasingly used in an attempt to control COTS densities, most of them display severe drawbacks including logistical challenges, high residual environmental impacts or low cost-effectiveness. We tested a new alternative control method based upon acidic injections of cheap, 100% natural products. We investigated the lethal doses, intraand inter-specific disease transmission and immune responses of COTS when injected with fresh lime juice (extracted from local Citrus arantifolia) and white spirit vinegar. High COTS mortality was achieved with small volumes: 10–20 ml per seastar induced death in 89%/ 97% of injected specimens after an average 34.3 h/29.8 h for lime juice and vinegar respectively. Highest efficiency was reached for both solutions with double shots of (2 × 10 ml) in two different areas on the body: 100% mortality occurred within 12–24 h, which is similar or faster compared with other current injection methods. Multiple immune measures suggested that death was very likely caused by pH stress from the acidic solutions rather than a bacterial infection. Contagion to either conspecifics or a variety of other reef species was not observed, even at COTS densities 15 times higher than the highest naturally reported. 10 to 20 l lime juice/vinegar could kill up to a thousand COTS at a cost of less than 0.05 USD per specimen; no permits or special handling procedures are required. We conclude that injections of lime juice and vinegar offer great advantages when compared to current best practises and constitute a cheap and natural option for all reefs affected by COTS.