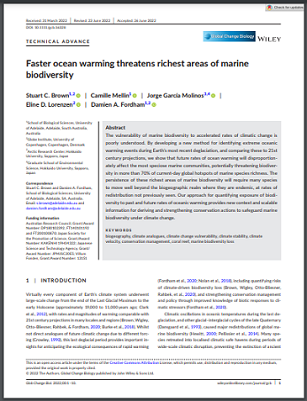 The vulnerability of marine biodiversity to accelerated rates of climatic change is poorly understood. By developing a new method for identifying extreme oceanic warming events during Earth's most recent deglaciation, and comparing these to 21st century projections, we show that future rates of ocean warming will disproportionately affect the most speciose marine communities, potentially threatening biodiversity in more than 70% of current-day global hotspots of marine species richness. The persistence of these richest areas of marine biodiversity will require many species to move well beyond the biogeographic realm where they are endemic, at rates of redistribution not previously seen. Our approach for quantifying exposure of biodiversity to past and future rates of oceanic warming provides new context and scalable information for deriving and strengthening conservation actions to safeguard marine biodiversity under climate change.

Beyond the boundaries: How regulation-centered marine protected area…
July 22, 2022 by sprep-pa
Read More

The effects of protected areas on the ecological niches of birds and…
July 15, 2022 by sprep-pa
Read More