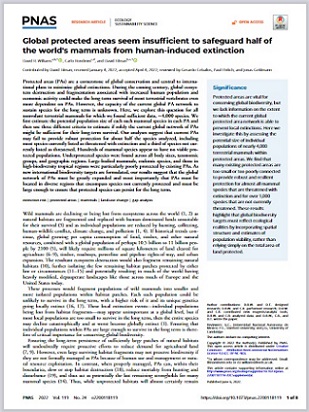 Protected areas (PAs) are a cornerstone of global conservation and central to international plans to minimize global extinctions. During the coming century, global ecosystem destruction and fragmentation associated with increased human population and economic activity could make the long-term survival of most terrestrial vertebrates even be more dependent on PAs. However, the capacity of the current global PA network to sustain species for the long term is unknown. Here, we explore this question for all non-volant terrestrial mammals for which we found sufficient data,∼4,000 species. We first estimate the potential population size of each such mammal species in each PA and then use three different criteria to estimate if solely the current global network of PAs might be sufficient for their long-term survival. Our analyses suggest that current PAs may fail to provide robust protection for about half the species analyzed, including most species currently listed as threatened with extinction and a third of species not currently listed as threatened. Hundreds of mammal species appear to have no viable protected populations. Underprotected species were found across all body sizes, taxonomic groups, and geographic regions. Large-bodied mammals, endemic species, and those in high-biodiversity tropical regions were particularly poorly protected by existing PAs. As new international biodiversity targets are formulated, our results suggest that the global network of PAs must be greatly expanded and most importantly that PAs must be located in diverse regions that encompass species not currently protected and must be large enough to ensure that protected species can persist for the long term.

‘Lau seascape will be a marine protected area’
July 1, 2022 by sprep-pa
Read More

Human impacts on mammals in and around a protected area before, during,…
July 1, 2022 by sprep-pa
Read More

A Contrast of Criteria for Special Places Important for Biodiversity…
July 1, 2022 by sprep-pa
Read More

Global protected areas seem insufficient to safeguard half of the world…
June 17, 2022 by sprep-pa
Read More