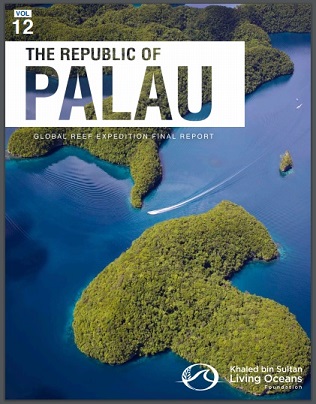 The Global Reef Expedition: The Kingdom of Palau Final Report provides a summary of the foundation’s findings along with valuable information on the state of coral reefs and reef fish in Palau. It also contains recommendations that can help Palau in their efforts to preserve their magnificent coral reefs for the use and enjoyment of future generations.   An international team of scientists worked closely with local experts to study coral reefs in Palau. They spent nearly a month at sea conducting over 1,800 standardized surveys of the benthic and fish communities in Palau. They found exceptional coral cover, but the reef fish communities in Palau were similar to other reefs surveyed in the Western Pacific. Signs of overfishing were observed on nearshore reefs despite existing regulations, particularly on reefs near population centers. However, the study’s authors believe that by expanding current fisheries management regulations and expanding no-take no-entry marine protected areas, Palau’s reef fish communities could become some of the best in the world.

Gender equality is diluted in commitments made to small-scale fisheries
January 25, 2021 by [email protected]
Read More

How far have we come? A review of MPA network performance indicators in…
January 25, 2021 by [email protected]
Read More