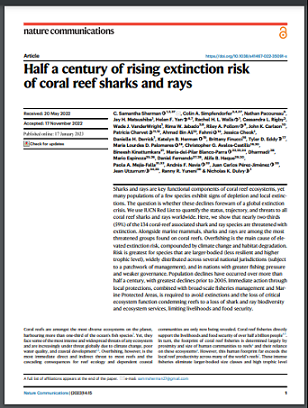 Sharks and rays are key functional components of coral reef ecosystems, yet many populations of a few species exhibit signs of depletion and local extinctions. The question is whether these declines forewarn of a global extinction crisis. We use IUCN Red List to quantify the status, trajectory, and threats to all coral reef sharks and rays worldwide. Here, we show that nearly two-thirds (59%) of the 134 coral-reef associated shark and ray species are threatened with extinction. Alongside marine mammals, sharks and rays are among the most threatened groups found on coral reefs. Overfishing is the main cause of elevated extinction risk, compounded by climate change and habitat degradation. Risk is greatest for species that are larger-bodied (less resilient and higher trophic level), widely distributed across several national jurisdictions (subject to a patchwork of management), and in nations with greater fishing pressure and weaker governance. Population declines have occurred over more than half a century, with greatest declines prior to 2005. Immediate action through local protections, combined with broad-scale fisheries management and Marine Protected Areas, is required to avoid extinctions and the loss of critical ecosystem function condemning reefs to a loss of shark and ray biodiversity and ecosystem services, limiting livelihoods and food security.