Human impacts on mammals in and around a protected area before, during, and after COVID-19 Lockdowns 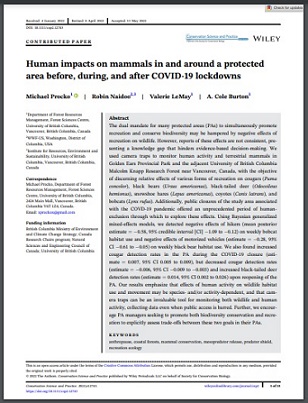 The dual mandate for many protected areas (PAs) to simultaneously promote recreation and conserve biodiversity may be hampered by negative effects of recreation on wildlife. However, reports of these effects are not consistent, presenting a knowledge gap that hinders evidence-based decision-making. We used camera traps to monitor human activity and terrestrial mammals in Golden Ears Provincial Park and the adjacent University of British Columbia Malcolm Knapp Research Forest near Vancouver, Canada, with the objective of discerning relative effects of various forms of recreation on cougars (Puma concolor), black bears (Ursus americanus), black-tailed deer (Odocoileus hemionus), snowshoe hares (Lepus americanus), coyotes (Canis latrans), and bobcats (Lynx rufus). Additionally, public closures of the study area associated with the COVD-19 pandemic offered an unprecedented period of humanexclusion through which to explore these effects. Using Bayesian generalized mixed-effects models, we detected negative effects of hikers (mean posterior estimate = 0.58, 95% credible interval [CI] 1.09 to 0.12) on weekly bobcat habitat use and negative effects of motorized vehicles (estimate = 0.28, 95% CI 0.61 to 0.05) on weekly black bear habitat use. We also found increased cougar detection rates in the PA during the COVID-19 closure (estimate = 0.007, 95% CI 0.005 to 0.009), but decreased cougar detection rates (estimate = 0.006, 95% CI 0.009 to 0.003) and increased black-tailed deer detection rates (estimate = 0.014, 95% CI 0.002 to 0.026) upon reopening of the PA. Our results emphasize that effects of human activity on wildlife habitat use and movement may be species- and/or activity-dependent, and that camera traps can be an invaluable tool for monitoring both wildlife and human activity, collecting data even when public access is barred. Further, we encourage PA managers seeking to promote both biodiversity conservation and recreation to explicitly assess trade-offs between these two goals in their PAs.