Towards the Quantification of Illegal, Unreported and Unregulated (IUU) Fishing in the Pacific Islands Region 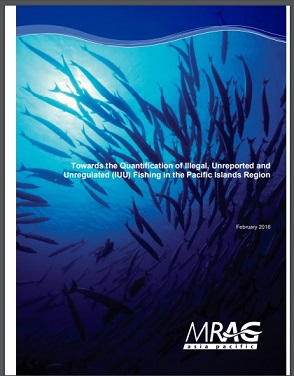 Illegal, unreported and unregulated (IUU) fishing is a recognised global problem which undermines the integrity of responsible fisheries management arrangements and results in lost value to coastal states. Previous studies have shown that the effects of IUU fishing are often hardest felt in developing coastal states heavily reliant on fishing for income. Quantifying the nature and extent of IUU fishing is important in gauging potential losses suffered by coastal states, addressing uncertainties in stock assessments and planning effective monitoring control and surveillance (MCS) responses. However, by its very nature IUU fishing is secretive and difficult to estimate with accuracy. Previous attempts to estimate IUU fishing in the Western Pacific Ocean (including non-tuna fisheries in the Philippines and Indonesia) have put the likely value at between US$707m and $1,557m, however this estimate included both non-tuna fisheries (e.g. shrimp, demersal fish) as well as areas outside the ‘Pacific Islands region’ as defined in this study (e.g. Indonesia, Philippines). As part of the European Union-funded Devfish II project, this study was commissioned to produce estimates of the volume and value of IUU fishing in the tuna fisheries of the Pacific Islands region.