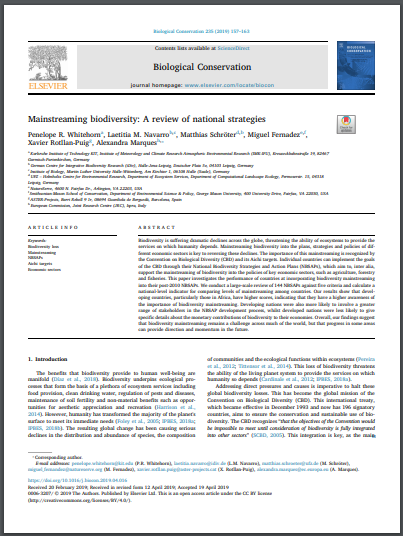 Biodiversity is suffering dramatic declines across the globe, threatening the ability of ecosystems to provide the services on which humanity depends. Mainstreaming biodiversity into the plans, strategies and policies of different economic sectors is key to reversing these declines. The importance of this mainstreaming is recognized by the Convention on Biological Diversity (CBD) and its Aichi targets. Individual countries can implement the goals of the CBD through their National Biodiversity Strategies and Action Plans (NBSAPs), which aim to, inter alia, support the mainstreaming of biodiversity into the policies of key economic sectors, such as agriculture, forestry and fisheries. This paper investigates the performance of countries at incorporating biodiversity mainstreaming into their post-2010 NBSAPs. We conduct a large-scale review of 144 NBSAPs against five criteria and calculate a national-level indicator for comparing levels of mainstreaming among countries. Our results show that developing countries, particularly those in Africa, have higher scores, indicating that they have a higher awareness of the importance of biodiversity mainstreaming. Developing nations were also more likely to involve a greater range of stakeholders in the NBSAP development process, whilst developed nations were less likely to give specific details about the monetary contributions of biodiversity to their economies. Overall, our findings suggest that biodiversity mainstreaming remains a challenge across much of the world, but that progress in some areas can provide direction and momentum in the future.