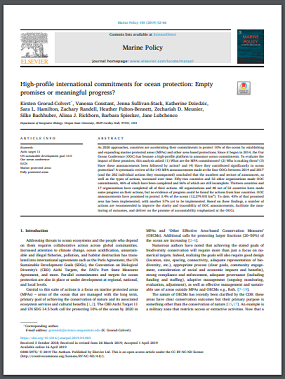 As 2020 approaches, countries are accelerating their commitments to protect 10% of the ocean by establishing and expanding marine protected areas (MPAs) and other area-based protections. Since it began in 2014, the Our Ocean Conference (OOC) has become a high-profile platform to announce ocean commitments. To evaluate the impact of these promises, this analysis asked: (1) What are the MPA commitments? (2) Who is making them? (3) Have these announcements been followed by action? and (4) Have they contributed significantly to ocean protection? A systematic review of the 143 MPA announcements made at the four OOCs between 2014 and 2017 (and the 202 individual actions they encompassed) concluded that the numbers and sectors of announcers, as well as the types of actions, increased over time. Fifty-two countries and 52 other organizations made OOC commitments, 46% of which have been completed and 56% of which are still incomplete. Thirteen countries and 17 organizations have completed all of their actions. All organizations and 48 out of 52 countries have made some progress on their actions, but no evidence of progress could be found for actions from four countries. OOC announcements have promised to protect 3.4% of the ocean (12,279,931 km2 ). To date, 43% of that promised area has been implemented, with another 57% yet to be implemented. Based on these findings, a number of actions are recommended to improve the clarity and traceability of OOC announcements, facilitate the monitoring of outcomes, and deliver on the promise of accountability emphasized at the OOCs.

Lights out for seabirds
April 3, 2020 by [email protected]
Read More

Coronavirus is a wake-up call: our war with the environment is leading to…
April 3, 2020 by [email protected]
Read More