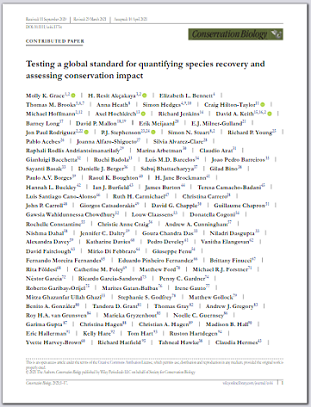 Recognizing the imperative to evaluate species recovery and conservation impact, in 2012the International Union for Conservation of Nature (IUCN) called for development of a“Green List of Species” (now the IUCN Green Status of Species). A draft Green Status framework for assessing species’ progress toward recovery, published in 2018, proposed2 separate but interlinked components: a standardized method (i.e., measurement againstbenchmarks of species’ viability, functionality, and pre-impact distribution) to determine current species recovery status (herein species recovery score) and application of that method to estimate past and potential future impacts of conservation based on 4 metrics (conservation legacy, conservation dependence, conservation gain, and recovery potential). We tested the frame-work with 181 species representing diverse taxa, life histories, biomes, and IUCN RedList categories (extinction risk). Based on the observed distribution of species’ recovery scores, we propose the following species recovery categories: fully recovered, slightly depleted, moderately depleted, largely depleted, critically depleted, extinct in the wild, and indeterminate. Fifty-nine percent of tested species were considered largely or critically depleted. Although there was a negative relationship between extinction risk and species recovery score, variation was considerable. Some species in lower risk categories were assessed as farther from recovery than those at higher risk. This emphasizes that species recovery is conceptually different from extinction risk and reinforces the utility of the IUCN Green Status of Species to more fully understand species conservation status. Although extinction risk did not predict conservation legacy, conservation dependence, or conservation gain, it was positively correlated with recovery potential. Only 1.7% of tested species were categorized as zero across all 4 of these conservation impact metrics, indicating that conservation has, or will, play a role in improving or maintaining species status for the vast majority of these species. Based on our results, we devised an updated assessment framework that introduces the option of using a dynamic baseline to assess future impacts of conservation over the short term to avoid misleading results which were generated in a small number of cases, and redeﬁnes short term as 10 years to better align with conservation planning. These changes are reﬂected in the IUCN Green Status of Species Standard.