A herpetofauna with dramatic endemism signals an overlooked biodiversity hotspot 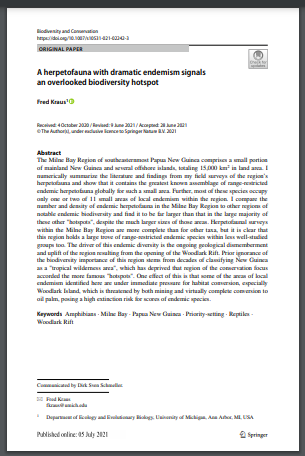 The Milne Bay Region of southeasternmost Papua New Guinea comprises a small portion of mainland New Guinea and several offshore islands, totaling 15,000 km2 in land area. I numerically summarize the literature and fndings from my feld surveys of the region’s herpetofauna and show that it contains the greatest known assemblage of range-restricted endemic herpetofauna globally for such a small area. Further, most of these species occupy only one or two of 11 small areas of local endemism within the region. I compare the number and density of endemic herpetofauna in the Milne Bay Region to other regions of notable endemic biodiversity and fnd it to be far larger than that in the large majority of these other "hotspots", despite the much larger sizes of those areas. Herpetofaunal surveys within the Milne Bay Region are more complete than for other taxa, but it is clear that this region holds a large trove of range-restricted endemic species within less well-studied groups too. The driver of this endemic diversity is the ongoing geological dismemberment and uplift of the region resulting from the opening of the Woodlark Rift. Prior ignorance of the biodiversity importance of this region stems from decades of classifying New Guinea as a "tropical wilderness area", which has deprived that region of the conservation focus accorded the more famous "hotspots". One efect of this is that some of the areas of local endemism identifed here are under immediate pressure for habitat conversion, especially Woodlark Island, which is threatened by both mining and virtually complete conversion to oil palm, posing a high extinction risk for scores of endemic species.

Scientists’ Warning to Humanity on Threats to Indigenous and Local…
July 27, 2021 by [email protected]
Read More

Virtual training workshop on ‘Introduction to the Global Database on…
July 21, 2021 by [email protected]
Read More

Virtual training workshop on ‘Introduction to the Global Database on…
July 12, 2021 by [email protected]
Read More