'Scale of This Failure Has No Precedent': Scientists Say Hot Ocean 'Blob' Killed One Million Seabirds 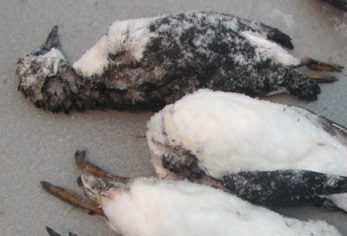 On the heels of new research showing that the world's oceans are rapidly warming, scientists revealed Wednesday that a huge patch of hot water in the northeast Pacific Ocean dubbed "the blob" was to blame for killing about one million seabirds. The peer-reviewed study, published in the journal PLOS ONE, was conducted by a team of researchers at federal and state agencies, conservation groups, and universities...The lead author called the mass die-off "a red-flag warning about the tremendous impact sustained ocean warming can have on the marine ecosystem."